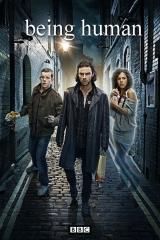 Genre: Comedy,Drama,Fantasy,Horror
Network: BBC Three
Release date: February 18, 2008
External link: TheTVDB
Summary:
The central premise of Being Human is that various types of supernatural beings exist alongside human beings, with varying degrees of menace; that three of these supernatural beings are opting to live amongst human beings rather than apart from them; and that these three characters are attempting (as much as is possible) to live ordinary human lives despite the pressures and dangers of their situations. They are constantly threatened with exposure or persecution, with pressure from other supernatural creatures, and with problems caused by their attempts to deal with their own natures.

In The Morning
season 02
episode 06

Though the Hea
season 03
episode 07