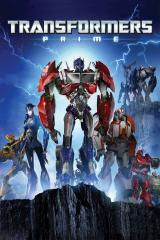 Genre: Action,Adventure,Animation
Network: The Hub
Release date: November 29, 2010
External link: TheTVDB
Summary:
Roll out with Optimus Prime, Bumblebee, Arcee, Ratchet, Bulkhead, and the rest of the heroic Autobots as they battle the evil Decepticons. Now that big bad Megatron has returned with a mysterious and dangerous element, Team Prime must prepare for an epic battle. But that's not so easy when they have to guard over Jack, Miko, and Raf, three normal kids who’ve accidentally discovered the Autobots. As Team Prime works to defend Earth from destruction, the drama gets just as intense as the heavy metal action.

One Shall Fall
season 01
episode 23

One Shall Rise
season 01
episode 24

One Shall Rise
season 01
episode 25

Minus One
season 03
episode 10