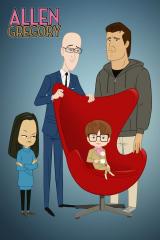 Genre: Animation,Comedy
Network: FOX (US)
Release date: October 30, 2011
External link: TheTVDB
Summary:
"Allen Gregory" is an animated series that tells the story of one of the most pretentious 7-year-olds of our time. When he looks in the mirror, Allen Gregory De Longpre doesn't see a child. He sees a young man who is intelligent, sophisticated, worldly, artistic and romantic—characteristics he inherited from his doting father, Richard. The pair share an extraordinary father-son bond—a bond that is sometimes annoyingly interrupted by Richard's life partner, Jeremy, for whom Allen Gregory has minimal respect, if any at all.