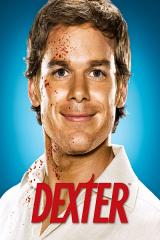 Genre: Crime,Drama,Mystery,Suspense,Thriller
Network: Showtime
Release date: October 01, 2006
External link: TheTVDB
Summary:
Dexter Morgan is a Miami-based blood splatter expert who doesn't just solve murders; he commits them too. In fact, he's a serial killer -- but he only murders the guilty, so he feels justified with his lifestyle choices. His policewoman sister and his cop co-workers have no idea Dexter lives a double life; however, adoptive father Harry knows his secret, and does, in fact, help Dexter hone his "skills." It's a unique brand of justice for which charming Dexter feels a psychological hunger.

Remains to Be
season 04
episode 02

Blinded By The
season 04
episode 03

Beauty and the
season 05
episode 04

Everything Is
season 05
episode 06

In the Beginni
season 05
episode 10

Those Kinds of
season 06
episode 01

Smokey and the
season 06
episode 03

Make Your Own
season 08
episode 09