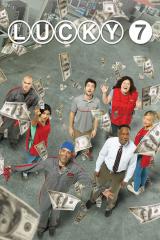 Genre: Drama
Network: ABC (US)
Release date: September 24, 2013
External link: TheTVDB
Summary:
In Astoria, Queens, a group of seven gas station employees have been chipping into a lottery pool for months, never thinking they’d actually win. Money could solve problems for each of them. Matt could get his girlfriend and 2 kids out of his mother’s house. Matt’s brother Nicky, an ex-con, could pay off a dangerous debt. Samira, a second-generation Pakistani immigrant, could afford to go to Juilliard. Denise, a plucky cashier, could focus on rebuilding her crumbling marriage. Leanne, a young mother, could help her daughter realize her dreams. Bob, the store’s manager, could finally retire and Antonio could give his wife and kids a whole new life.