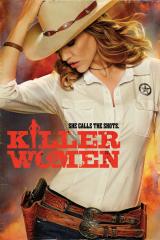 Genre: Drama,Western
Network: ABC (US)
Release date: January 07, 2014
External link: TheTVDB
Summary:
Of all the notorious lawmen who ever patrolled the violent Texas frontier, none are more storied than the Texas Rangers. And none could be more macho. While the once all-male bastion now allows "lady rangers", no one can say they are welcomed. Being the only female ranger in this elite squad isn't going to stop Molly Parker, she's ballsy and badass enough to get the job done despite a good-ole network filled with harassment and discrimination. In another profession, being a stunning former beauty queen might open doors but for Molly... that distinction only makes it harder. Molly is committed to finding the truth and seeing justice served; a trait no doubt inherited from her father, a former Texas sheriff. She's even willing to break some rules to get it done.