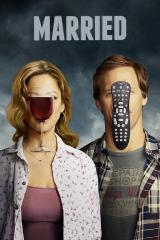 Genre: Comedy,Drama
Network: FX (US)
Release date: July 17, 2014
External link: TheTVDB
Summary:
Married is a half hour comedy about being miserably in love. Russ and Lina Bowman can barely remember what was like before kids, debt, and suburbia rained on their romance -- but every once in a while, in between the arguments about their declining sex life and who's driving carpool, they are reminded what drew them together in the first place -- they're best friends. The show also features Russ and Lina's friend AJ who is recently divorced and pretending he's over his wife, and their other friend Jess who is married to a much older man who can't keep up with her.